Wednesday I went in for my heart follow up and I will admit I was pretty excited to be going alone. Not that I don’t love having Tim go with me but I wanted to do some shopping for him and I assured him even with my new symptoms, it was probably a pulled muscle from coughing so hard and so much. This would just be a follow up so if anything, the doctor would have to order a few routine tests. No biggie!

And with Wednesday being one of our busiest nights between dance and church and homework…Tim agreed it would be best that he was home to do all of the running…just in case.

And within a few minutes of checking in and having my vitals taken…”just in case” happened. I explained the new symptoms I was experiencing with tremendous pain and pressure on the left side of my chest with a piercing sensation straight through to my shoulder blade. I informed the nurse it was probably a pulled muscle, however, my blood pressure was low, something around 95/55.

This seemed to be a concern and she continued to ask more questions as to if this is a typical low for me but after skimming through my chart she concluded this was not normal and my blood pressure has always been great…on the left side that is. I joked that if it’s low on my left and high on my right it should all even out. She ignored my sarcasm and asked about other symptoms I had been having such as the cough, that foggy feeling in my head and extreme fatigue….my usual I told her! She continued to take notes and I continued with my joking saying that it was probably so low because I had no husband or kids with me…still no laughter! C’mon!! Now that’s funny…I was sent back to the waiting area.

Then my regular nurse called me back to a room and stated the doctor had seen my vitals so he would be seeing me next. Really? Isn’t low blood pressure better than high?

We continued talking and I said I simply need a zpack. She went through my records I had brought from my recent local ER trip and she confirmed my blood counts showed no infection so the zpack would not have helped. Why this dang cough and horrible chest pain then? It must be a pulled muscle, at least that’s what I was convincing myself it was. I waited patiently for the doctor and wished Tim was sitting next to me, especially because I knew what was to come…sad face to an empty chair Sarah😉

Dr. Rossen came in and reviewed my symptoms yet again and ended up ordering a ct angiogram and functioning test of my heart. He referred to this as the “rolls Royce” of scans due to the updates of this machine! While waiting to receive the orders, I texted Tim to keep him informed. His first response of course, he was mad and knew better than not to have come with me. I mean really, how many times have we done this? We know better! I agreed saying whenever we think it’s something…it’s not, and when we think it’s nothing…it is.

I was able to get in to do the testing that same day at 3pm so in the meantime, since I had over two hours to kill, I went out to the hall and sat in a chair to people watch, also trying to get a little snooze in as I felt extremely exhausted…that time of day where it’s impossible to keep my eyes open.

As I dozed off and on, and without Tim there to comfort and distract me, my mind began to drift. All these tests…most likely to show nothing which means I deal with the symptoms, but if they show something then only nasty procedures to follow, no easy fix, not a matter of more exercise or healthier eating, no easy pill to just manage my symptoms…but then I saw a young mom walk by pushing her IV and a stroller. My bitterness quickly disappeared as I thought…at least I’m not sick here, having to see my kids in a hospital, not being able to go home.

But my heart deeply sank when I saw that young mother push the stroller up to the mirrored wall to show the reflection of her little girl, probably no more than 18 months. It was that little baby who had the tubes and IV and her mom was pushing her around to make her laugh and smile…a reminder of the reasons I am grateful I have the illness…and not my children!

I finally got ready for the scan and once the IV was in, I was set to go. I would also be getting some dye, the stuff that makes you all hot inside. With so many scans I’ve done, I knew what to expect…same ole story. This time, however, the contrast seemed hotter than usual, almost too uncomfortable, but I was able to make it through! Whewww! Time to hit Culvers and get home!

Not quite! Oddly, I got sick!! What?! I’ve had this junk how many times? I never get sick! Once out of the hospital, I called Tim to let him know I was on my way home but again, sickness struck and I had to pull over. My head began throbbing and I felt absolutely horrible!

I called Tim again, this time saying how much I missed him because I didn’t want to be driving the next two hours like this!  Tim was more concerned that this was my only reason I wanted him to be at my appointment with me, haha! I reassured him I missed him for so many reasons more😍 I then let him go as it seemed the more I talked the worse I felt.

I was beyond frustrated at this point…angry actually, and then I had to get sick again…I will spare details but in the midst of it all, I look up just in time to see this….

I don’t know why, but I thought “Really? Is this really in God’s plan?” I suddenly invisioned God up in His clouds writing out my life with this scene in it and I couldn’t help but laugh! Does God have a sense of humor or what?! And I mean that! Seeing that bus in that moment made my anger and frustration evaporate! I could not help being sick in my situation whereas those people on the bus would be bringing it on themselves😂 Yep, for whatever reason, my mind wandered all this way just from the sight of that bus, but it did perk me up enough to get me home.

And once home, after showing the kids the hospital’s choice of color for my bandage this time around, which I always think the wrist is the worst place for an IV… 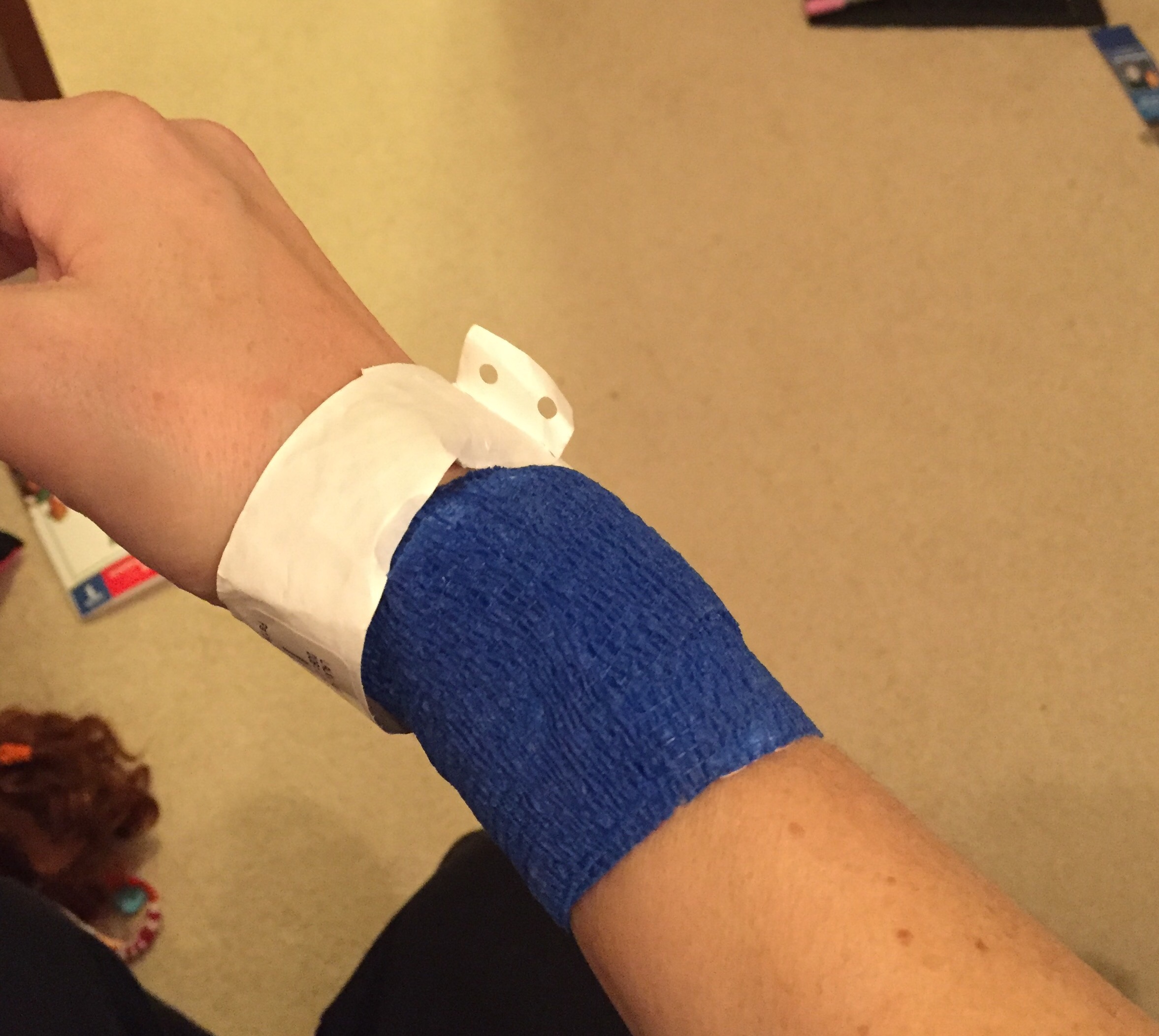 I went to bed and stayed there until morning! I don’t know why this dye affected me so bad this time, as though I had a procedure done, but this testing wasn’t a regular one so maybe the contrast was stronger. Either way, I have been drinking down the water…a typical regimen after all of my tests and procedures, to flush that junk out of my system as fast as possible.

Unfortunately, I did receive an email today from the doctor himself stating that there is blockage in a pulmonary artery and vein, however, he does not feel the area it’s in can be stented. He will be meeting with my pulmonologist to review the scan and figure out a game plan from there. We will then discuss the results and what we need to do in more detail.

I try not to complain too much about my symptoms because it is what it is, but this cough is absolutely ridiculous, to the point I become hoarse and it especially keeps me up every night with extreme coughing spells. Even Tim told me it was annoying…Oh I’m sorry babe…I’m sorry that nothing helps me but I’m especially sorry that this cough is bothering YOU honey😬😝 Oh shoot, I forgot I’m working on this…😉

But hey…Friday I had my eye exam and apparently five eye surgeries is all it takes because my eyes look great and no return visit for four months!

It’s been a fun weekend hanging out with the kids and we are appreciating the pretty mild temperatures for December! God has used every obstacle to grow us stronger in Him, making every obstacle a blessing, so there is no point in stressing over what may or may not come out of the results from these tests.

Enjoy the rest of your weekend and only SIX more days til Christmas!!!