Asher and I decided to play outside for a little bit this morning after the kids got on the bus. As we were walking around the corner of the house, we heard an extremely loud bellow and Tim instantly said “we have a cow dying.”

Tim assumed the cow was bloated from the glance he had taken so he went to get a few things from his truck that he might need to debloat the cow. The bellow became more frequent and even louder, scaring Asher back to the house, while I walked up to the pen prepared to help in any way that I could.

Right as I arrived at the gate, I saw the cow tip over with his leg sticking straight up. I also observed what I assumed was cold air coming from the cow, which I didn’t understand as I was certain he had just fallen over and died. I then noticed that “air” was constant so I yelled back and questioned Tim “ummm is that cow smoking?!”

Tim came up and was shocked to see a cord beneath the cow and without thinking he ripped the cord out from beneath it, resulting in a crackling noise and flames shooting all over!

I stood there dazed realizing I had just been watching a cow get electrocuted!!! I even saw the same bewildered expression on Tim’s face as he says ” I probably shouldn’t have grabbed the cord!”

We laughed in disbelief but also with unease as we acknowledged how fortunate we really were and how much worse the situation could have been! Thankfully this happened outside in the pen because if it would have happened in our barn…with all of the bedding…along with the strong winds…the whole barn would have been up in flames in no time!

Apparently the cow was able to bend the gate over and reached the cord of the heaters used to keep the waters from freezing…kind of ironic huh?!

Oh, and about 30 seconds after I thought I had witnessed the cow’s last breath, he stood back up, and was a little shaky, but he survived and is doing well now!! 😭

After all the excitement was over, Asher was ready to get back in the house and I was ready to start working.

Then we have also started something new as a family…kids cooking dinner!! Yeyyyy 😄 Our days are pretty full throughout the week, however, Thursday is our one free night of no activities! So, every Thursday each of the kids will be taking turns cooking dinner…which they are actually excited to do! They plan the meal, I get the groceries and then they prepare it! Skyler started off since she is the oldest and chose homemade pizza! She did it all… 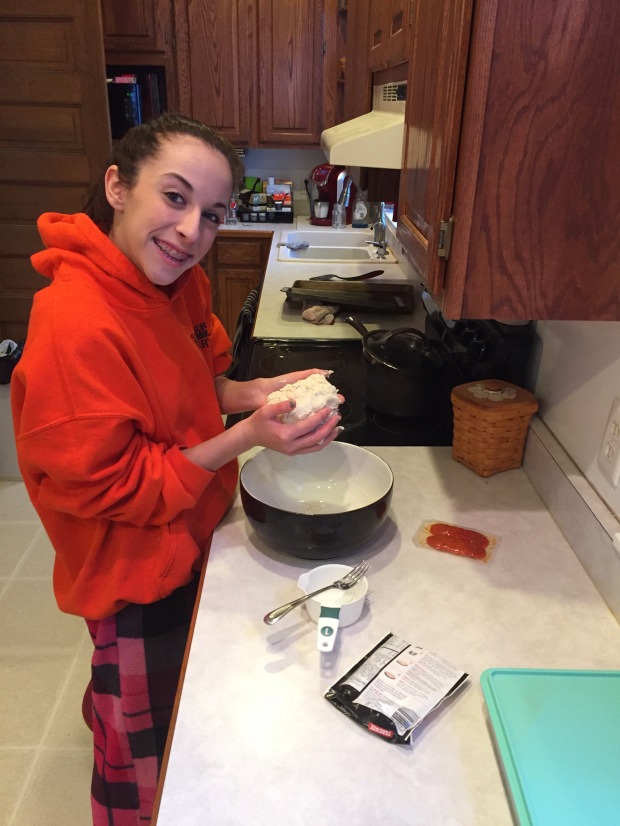 It turned out great and everyone loved it!!

Nathan has already chosen his meal for next week and this is a win win for everyone! Kids are helping me out by cooking the meal while I offer assistance. And we have a lot of fun doing it…along with it being a great opportunity for me to have some one on one with each of the kids…not to mention them gaining some new skills and becoming more independent!

Definitely a good day to be thankful for…and we all learned some things along the way!!😬😍