Funny how I signed up for a 5k then shortly after, I was bombarded with medical appointments. Well today was my day to get back on track with exercise and the kids sure did keep me motivated! Skyler and Nathan put on their rollerblades while Leah rode her bike and I pushed Asher in his stroller down the bike trail.

Of course we couldn’t go without taking a selfie, and yes, that’s me lagging behind!

Then Leah had to stop and freshen up her lipstick…

This is the mile marker right after the tunnel, but that hill!! How do I forget about it every time?! And here’s my confession of being a bad mom…instead of telling the kids to walk down in the grass…I simply did not watch them go down!! 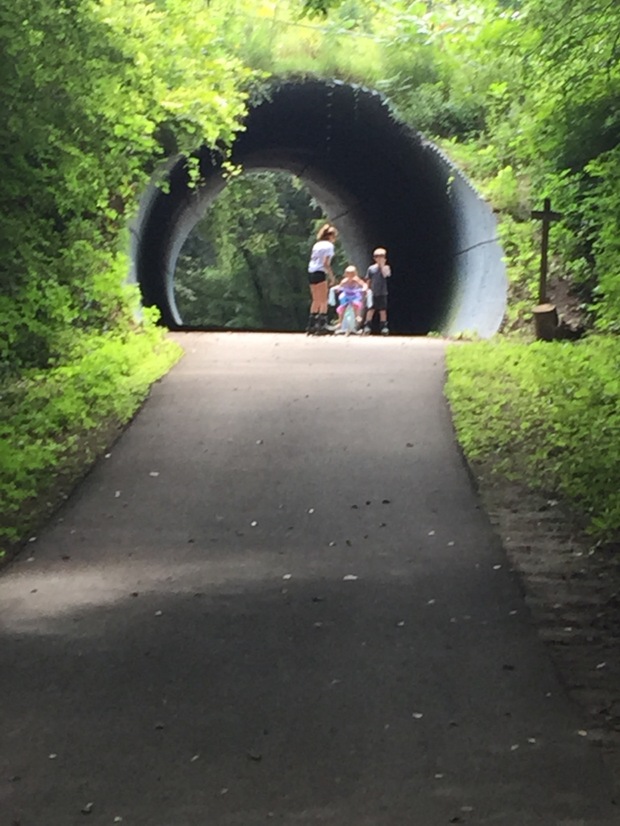 Everyone survived the two mile stretch, and even with smiles on their faces…

Right when we got home and drove up the driveway Skyler noticed some of our bigger cows were out of their fenced area. And with Tim being gone, it was up to me and Skyler to round up four, 700 pound cows back into their original spot. I have to admit, I was quite impressed that we were able to remain calm and pull it off…because those things are big when you are up close and personal with them!! Thankfully they were still in a fenced area or yes, I might have panicked!

Later on in the day my brother Ryan stopped by with Caden and Keira. Kids disappeared within minutes and Ryan and I were able to have a nice visit…and some laughs! It’s always great seeing them and the kids sure do have fun when they get the chance to play together!

Tim was gone all day due to work and power washing so he didn’t get home until after chores tonight, making his day not as eventful as ours. Tomorrow is Sunday and while he can’t completely be off from work, Tim does try to keep Sundays restricted to only chores so that he can spend most of the day with family and tomorrow we are looking forward to doing a little something fun with the kids after church!

Enjoy the rest of your weekend!